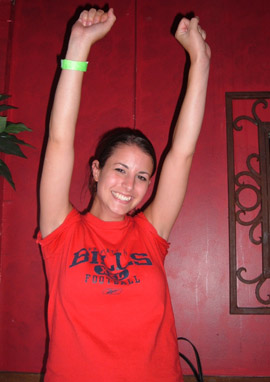 First and foremost I must point out that this Orchard Park native’s name is not just a clever coincidence. Ms. Beers, or “Bud Lite,” as I’ve aptly named her for her fine performance before, during, and after the Texans game last weekend, could easily be mistaken for a Jill at first sight. However, it is rumored that as a child she was such a die hard fan that she tried to change her fantastic name from ‘Beers’ to ‘Bills.’ Later in life, after discovering that smooth, tasty, golden liquid, she gladly reconsidered and now enjoys both words each and every Sunday with us down at McFadden’s.

When asked who her favorite player was, Ms. Beers replied “old school or new school?” proving again that this woman was truly a dream Goddess for every single Buffalo man standing (or wobbling, as some were at that point in the game). Bruceman was her choice pick that day as all time favorite, an excellent choice, as we all know. McFadden’s, however, was her pick of the day for all time favorite thing discovered in NYC, since her arrival here 2 seasons ago, also an excellent choice.

Adrianne was not only chosen for the obvious reasons, but also for her spirited cheers through-out a rough game. Her closing words to me: “I’ve got a feeling…. (feel free to finish the rest outloud, as I’m sure you all know the words).” So this weeks “Cheers,” go to Ms. Adrianne Beers.